Skip to the content
Search
Mommy Mindfulness 2 years ago

When I first met my husband he was failing chemistry in his first semester of college. He told me that he wanted to go to dental school and be an Oral Surgeon. My response to this information? …..”Well that’s not going to work.”   Ha!

About three months after that conversation we were married and I joined him on his journey. I affectionately called it “The school for life program” because it felt like we had been in school forever and had forever to go. Our journey for him to reach his chosen career grew my faith.

One day I looked at a website that showed different applicants’ statistics and where they had applied and where they interviewed and eventually where they were offered a spot.  I felt so defeated. I remember thinking, “there is no plan B, this is it, what are we going to do?“

That year we applied to 20 some schools (we were trying to increase our odds). The state university’s dental school had 63 slots and about 1600 applicants. That is only a 3.9% chance. This weighed on me heavily.

What is the difference between faith and a wish? A wish you think about and want to have happen, but FAITH requires more than a desire inside, it requires hope, action, and evidence, as well as assurances along the way.

Hope is the desire, where it begins.

Action is all the things you do and think and prepare for, in anticipation of the desired outcome.

But what makes it more, what makes it FAITH is explained in Hebrews 11:1 where it says that faith is the assurance or substance of our hope, some translations say confidence. Faith is the evidence of what is unseen BUT that is real or true.

I began praying to know if dental school was the course we should pursue. I began feeling greater assurance and was shown greater evidence over time that our hope of getting into dental school truly was God’s desire for our life. It was an act of faith, and not a wish alone, to pursue this course.

What evidence did we receive?  Many. I will recount a couple here.

#1: Kevin (that’s my husband) began observing at Eastern Washington University’s dental hygiene school during his junior year in undergrad.  He made connections with educators there that he enjoyed.  We learned at the end of his jr. year that our state university’s dental school was going to be opening up a special extended program where the first-year students would be studying at the very same hygiene school Kevin was observing. In addition, the director of the hygiene program, whom Kevin got to know very well, was going to be the director of that expanded dental program and was involved in the admissions for the extended program.

Because of the intensity of this professor’s chemistry courses Kevin was prepared. He scored in the 97th percentile on the chemistry section on his Dental Admissions Exam.

When this same professor found out that Kevin was applying to dental school he asked if he could write Kevin a letter of recommendation. It was flattering at the time but it turned out to be instrumental in Kevin’s admittance. During Kevin’s interview at the state school, this professor’s letter was highly discussed and this professor was well known and respected among the educators there.  We had no idea. Again the Lord had directed and guided us, even when we had no idea He was doing it.

Despite the statistics and my fears, Kevin was among the first round of students granted an interview at our state school and admitted. I was so relieved and humbled by God’s grace that was shown to us in this process.

Kevin graduated from dental school in 2012 and decided to go on to endodontic school, instead of oral surgery school. He has been practicing endodontics for over 6 years now.

What about you? What are your desires? Do you have any assurances from God that make your desire a true act of faith? This doesn’t mean that there are not moments of doubt or frustration or confusion during your journey of faith. It only means that there are assurances along the way that help you remember your objective during those moments of difficulty.  What are your wishes and what are your acts of faith? The way to tell the difference is that faith has assurances and evidence. It has substance. It is much more than a ‘Wish Upon a Star’.  Ask God to show you the evidence of your faith. Then write it down to read in your moments of doubt.

Now, how does my husband’s experience of failing chemistry relate to me being a mom?

Well, over the course of 12 years, I gained lots of practice. I learned to watch and ask for and remember the assurances and evidence of my desire/faith.

During the 15 years I’ve been a mom and birthing 6 kids I have looked for assurances and evidence as I navigated this journey of motherhood. I have sat in NICU’s and wondered if my child would get better. I have gone through a high-risk pregnancy where both me and baby were at risk of death.  I have navigated a child’s heart defect, listening to his heart several times a day for years. I journeyed with one child through 6 years of speech therapy due to significant speech issues. Other journeys of my children have taken us through autism, sensory processing disorder, various eye problems that required patching and intense eye therapy, childhood anxiety and learning disorders. In each of these instances I have prayed and asked God for help, assurance, and His evidence along the way.

In my experience the connection of a loving mother to a child is accompanied closely with divine help and aid. Mothering is an act of love and faith.

What about you? What difficult paths have you been on (OR are currently traveling) that you could use some assurance and evidence of your faith?  Ask and look.

Give it a try, 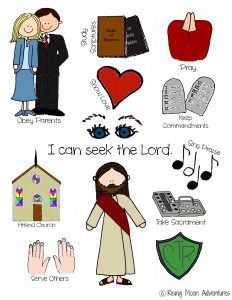 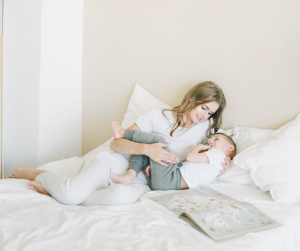